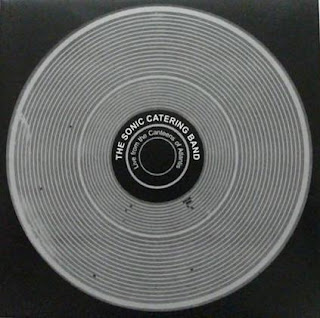 i learned about sonic catering band and their work from michael prime sometime in mid / late 90's more or less. not sure 100%. peter strickland one of the founding members is 1/2 greek 1/2 english so during a conversation michael told me about peter and his work w/ the scb. they were having or already had their special christmas pudding split 7" on rene heid's rund und dem watzmann label amd was a true killer! it was also this moterfuckin' scb 5x10" boxset too that was looking after so after a couple of emails found myself meeting and hanging out in athens w/ peter. long story to cut it short however been keen on a project that used to produce and mix its sound while cooking it was something unique and sort of new grounds to me. guess to many others too.

sometime in 2002 peter asked me whether i liked the idea of issuing their entire live set from the forde gallery in geneva. i hooked up the idea which slowly transformed to a double cd thing as i always loved to do a double LP or CD needless to say a real boxset. it actually started for a boxset thing but being unemployed back then and short of money but also the lack of finding the right metal box (yep pil's influence could be tracked on this idea) to do it we kept on the double foldout sleeve. to look like those old american LPs of the 50's/60's at first but then being tooo expensive to do such a thing in greece (almost the double money back then) so this one came up. not that i don't like it. on the contrary maya did her ultimate best on it. and that's how it came out. a documentation / compilation of some of their finest moments since the very first chop they did till the forde gallery live set w/ bits and pieces in the first cd from their memorable live set in moloko restaurant in geneva.

still love it, still dying for it! guess is also a host of experiences that lived w/ scb since then that's why but still is an extremely beloved absurd.


live from the canteens of atlantis

Thanks for all the great music.
But part 2 seems unavailable.

Could you re-up the 2nd part?
No server is available for it.
Thanks in advance.