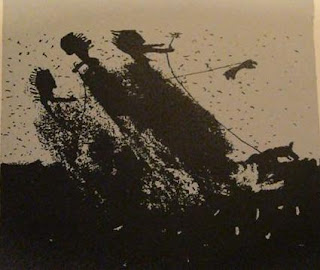 fall 90's or early 00's (guess the 2nd) and one day costis drygianakis calls to say that he has received a cdr from 2 guys in amphissa and a recording of the 'ghost' for his consideration for release on edo records.

slowly the story unfolds... the ghost is a custom that revived the last 11 years in the city of amphissa (continental greece, province of phokis) and takes place the last weekend of the carnival. goat (& not) dressed / shaped, wearing bells or clanging metal cans and brass ensembles and a huge march takes place in the lovely city.

however at one of the city's squares all the participants are gathered and there also music plays loud...

well at least that's a very amateur / brief description of the event(s). kostas tsiknis & dimitris andreou (the later also to be invovled in the 'at the toy room' cdr too and various other disguises solo or collaborative) created the music for the 1st event that took place in 99. this one is documented here and was a supplement to the fanzine 'all noises swell toghether in landscapes' issued in 2003 in some 200 xeroxed handed for free w/ articles, interviews with / on the new blockaders, anti-naturals, gustav metzger, a translation of aorta's joseph beuys 'coyote' issue, a title taken from a quote (as the blog's name actually) of walter benjamin's 'on hashish' book.

one of my lovliest ones on editions_zero as always recalls stunning memories of those early days.