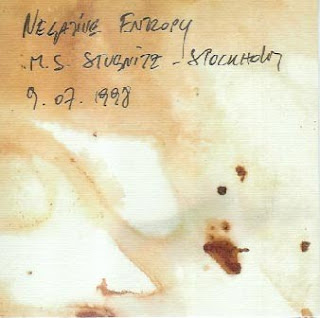 negative entropy was a short lived project of the late, gert feytons (of noise-maker's fifes) & michael prime (of morphogenesis / mycophile records) whose debut cd 'city open to the nomad' came out on beta lactam ring records in early 00's. back then i had asked for a possible release on absurd and a couple of years ago having in mind their performance at m.s stubnitz back in 98 i was surprised to receive a cdr of the recording with the proposal to issue it.
without second thoughts i accepted the idea (of course) no matter the rather ambiguous feeling of the sound. however that ambiguity slowly with the passing of years has become a great love for this recording. listen and listen and listen again at infrequent times and let yourself flow with the sounds...

Really enjoyed this, very absorbing, sparse but not boring. Thanks.