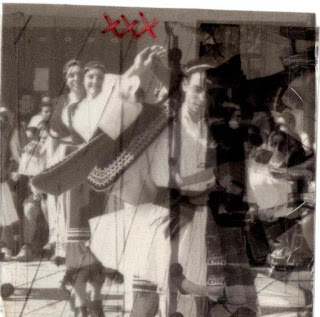 i met leonidas panourgias back during mid / late 90s via mail. he had sent me a tape with shortwave sounds actually. we lost touch for a couple of years until we met again in early 00s at small music theatre. spending time talking about mutual sound interests and more we said why dont' we give it a try for a duet? the chance for it was given when anastasis (or was stylianos tziritas) started the 'attempts' series at small music theatre. every monday night there was a freak out thing happening.
so we did ours. still love it. w/ all the fun that was around in the air as we were playing for an audience for some 5 max 10 friends including of course marios the guy who that day helped as sound technician for the place, get a guy whose most extreme listen in music could be perhaps say 'faith no more' or 'red hot chilli peppers' and ask him to handle sound in a place for experimental musics, you get dozens of funny stories. like us seting up and having a guy asking us for soundcheck as he was listening a noise somewhere, a sound that ended being a shortwave frequency coming out of leonidas's radio / walkman tape but he spent nearly an hour to discover.
we started doing our tapes / live elecs / toys show of pure retarded and ridiculous foustanella noie and of course in the end of the thing anastasis grivas who run the place and stylianos tziritas wanted to make their 'a capella' tribute to aux... you get in the end as bonus what happens or what usually happened when friends we were playing with or for friends...

also still grateful to lieven martens of imvated (now dolphins into the future) who kindly offered to issue it.
front covers were made out of transparent xeroxes leonidas found accidentally thrown near a garbage can somewhere downtown all dealing w/ traditional greek dances, costumes, etc fiting to aux's 'foustanella noise' sound. 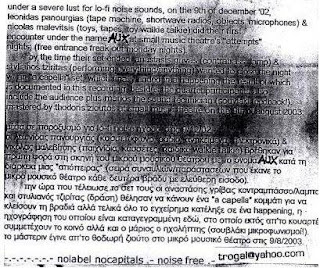