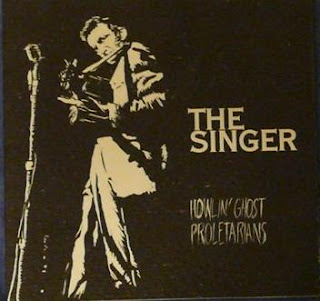 it was sometime after the release of their debut cdr on absurd (soon to be uploaded) that while chating one day with fabrice eglin i asked him if he had peggy lee's 'johny guitar' on mp3 to email as it was a piece that was used in a track of their eponymous album.
fabrice promised not only to send but wanted to surprise with a nice cdr compilation including it. after a couple of weeks crashed a small pack in my pbx includding that compilation cdr (drinking firewater) with a little note from fabrice regarding the 2nd cdr that i found in it simply titled as howlin ghost proletarians 'the singer' 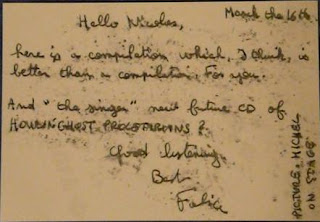 by the time i listened to it wanted to issue it immediately, accidentally panagiotis spoulos of phase! had gone nuts with their debut cdr and its bluesey sound so we found a good chance to collaborate and coproduced it. turned out to be one of our finest 'blues' records!

this one has johny cash on the cover and is somehow influenced too by cormac mccarthy's 'outer dark' novel.