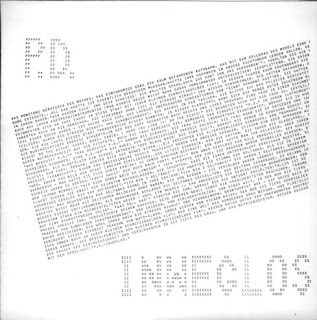 p.d., p.16.d4, & selektion have been some of my favest & influential projects ever! 'inweglos' had been the record i like a lot since early 90's that i first listened to it at a friend's place, as it combined it all... post punk / new wave (hhhmm you can call it also 'neue deutche welle' perhaps), experimentation, tape techniques, musique concrete elements, etc. that perhaps together with 'tionchor', 'nnnn', 'slp'& 1st sbothi belong to some of my favest recordings from the selektion crew.
under a lust for post punk / new wave stuff sometime in early 00's asked ralf wehowsky if he minds for a reissue or not. pretty funny but at that point he was looking also for someone who might be interested in doing 2 early w volumes (#4 & #5). fancied #4 a lot which actually saw daylight on editions_zero (sooner or later to be uploaded during the week) as i couldn't resist the temptation releasing it and meanwhile he was working on the restoration & transfer of the original tapes to cdr master... some extra tracks are featured too, sadly not the flexi that was coming with the LP.

Sadly, the divshare link isn't working for me... an other way to get hold of this (especially the bonus tracks, as I`ve already got the rest of the album)??
krautzuck_at_gmail.com