sam dellaria/adam sonderberg : fold your arms and the world will stop (absurd #29) 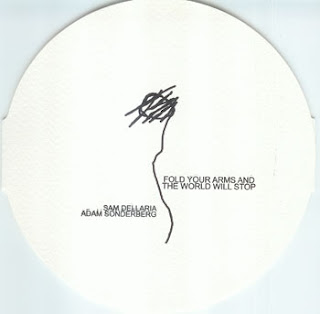 i was a lot into adam's work at that time (still am!) we had traded some cdrs/cds when he proposed this one and i fall in love with it upon listening it!
still hold the same feelings as the ones described in the press info which i paste below.

"fold your arms and the world will stop" sounds, as its title suggest, like a bizarre game scored by sam dellaria and adam sonderberg and is their third encounter (personally in consider it as their most intense) since their "signal hill" debut back in 1998 and 2000's "64 squares" (both were issued on sonderberg's longbox recordings - www.longboxrecordings.com). scored & assembled out of various recordings the duo extensively did within late 2002
the stunning result is giving you the feeling that slowly folding arms move like the soundscapes presented on this cdr, intense ambiances that slowly vary in mood & lower while listening in density & intensity to stop while arms have folded. a really phrenetic trip through dellaria's & sonderberg's visionary world.”

Nice story as for me. I'd like to read more about that theme. Thanks for sharing that data.
The only thing I would like to see here is such photo or even two :)
Sexy Lady
Russian Escorts London