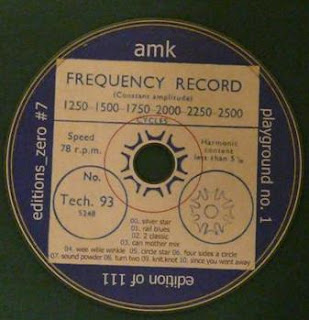 this is the 2nd 'playground' issue... the first was 'stavanger' by sindre bjerga & anders gjerde (soon to be uploaded). it's idea is to work like a fanzine but a kind of an 'audio fanzine' dealing with a specific theme and layout.

the amk one as the title says deals with one of editions_zero's all time faves... amk & his banned productions too.

the idea was dropped while doing an interview with him for a fanzine, in the meantime the 1st 'playground' issue was out and while thinking the possibility of an amk cdr too, came the idea of an issue glued on various 2nd hand LPs of my collection that were collecting dust in the basement as nobody was buying them (had done back then an effort to hand them in a 2nd hand store in athens downtown but got some and the rest he kindly rejected to buy. too bored also to feature a 'shit lp lot' on ebay so were 'recycled').

thymios of editions_zero burned the cdrs at his place in ioannina, using as a cdr label a modified label of an old 78inch record, maya lavda absurd's graphist worked on the layout, and the 30x30 circular cartons that were glued on each lp side including interview and almost banned detailed discography and i, glued at the editions_zero central in the city of amphissa the vinyls... came in a limited edition... pretty funny though still have plenty of the lp sleeves so if you have a spare lp to throw away feel free to drop an email here, download the cdr and make your own copy!

happy listening! (as soon as i track down in the archive the interview i'll upload it too!)