city of worms 'quester' (harsh 001 under licence from irre tapes) 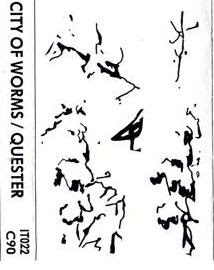 here comes one of my favest u.s projects at least for the 1st half of the 90's (still does but back then was nuts with them!).

discovered them thanks to the 'rhythm & passion' tape of neo rok zine. back then george priniotakis who run it had for distro the poison dwarfs tape on irre tapes. seeking for stuff to start my tape label wrote to matthias lang (irre tapes back then was one of the major european tape labels) for his catalogue. one of the first tapes i purchased was 'quester' and as i was haunted by it, dropped a line and asked if i could duplicate it and start my own tape label. or better say use it in order to slowly turn my tape label to more 'experimental / obscure musics' paths. matthias, who was a great help for lots of people back then, kindly allowed me to do so mid 92 a 1st edition of some 70 copies of a xeroxed cover of the tape and a piece of blue carton inside with a stamp of harsh dept harsh 001 came out. initially was supposed to be a sublabel of 'necrocannibalistic of necrocannibalismo' tapes so early copies bear the initials n.o.n. tapes harsh dept harsh 001.

a later edition of that year was a simple xerox of the irre cover and on the rear side handwritten the harsh dept harsh 001. can't recall how many tapes i traded (cuz actually that's why i started the tape label, luck of i.m.o.'s back then in greece, hard to get exchange, the only solutions were cash hidden in letters and releases to trade with...) but frankly was the baptism of fire that somehow helped to jump on the next release, etc etc etc etc...