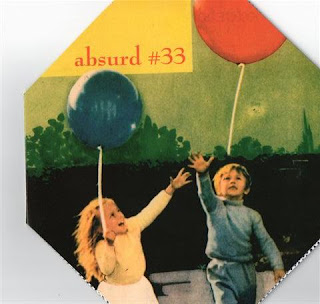 one of my favest absurds & 2 of my all time faves!

initially due for release in 2004 to celebrate the 50 years of rock 'n' roll. hence the music is pure 'rock n roll' (or you can say so...) housed in artwork taken from 60's and early 1910's issues of the greek mag 'i diaplasi twn paidon' (the inlays are taken from early 1910's issues the front cover is taken from a late 60's one) being one of my earliest memories of my mother's mag / record collection (the other being a compilation LP including trax of black sabbath, demis roussos, aphrodite's child & also beatles, aphrodite's child 7"s) and the 7"s sleeve a replica of the rolling stones 'through the past darkly (big hits vol. 2)' octagonal cover LP being a record i bought while searching sometime when 13 or 14, record stores in (then my home town) the city of kallithea, athens and suddenly picked up this great rolling stones compilation housed in this 'mysterious'sleeve!!!

no matter that due various delays saw daylight in 2007 but it was worth the wait... and definitely one of maya lavda's best works for absurd (not that the rest are less important) needless to say about emil & jason for me are both sides as two of their outmost devastating moments as they were (& still are) like maniacs into it when i first dropped the idea sometime in 2003 or so...

jason lescaleet - toys in the attic