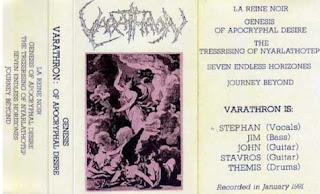 early 1991, varathron already have their first demo out since 89 but also have a different line up and fotis is to issue their debut 7" on his black vomit recs.

knowing already jim (aka mutilator ex bassist of rotting christ) & stephan (aka necroabyssious) as we were part of the local grind scene as at times we were playing together in offshoot bands but also having worked together for the 'genital necrosis' zine (genital grinder zine & rotting christ's meganecrosi zine collab) i asked them if i could issue the 2nd varathron demo they were to issue, also in a limited edition version on chrome tape. they didn't object however even this version didn't include the complete 'journey beyond' track which originally lasts for some 8 or 9 minutes. initially is a 'necrocannibalistic of necrocannibalismo' tapes release, supposed in 100 copies though less were spread.