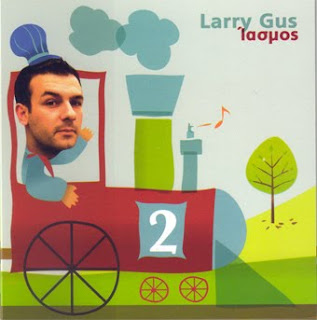 larry gus is another luminary of the greek electronica scene. by the time you think you know almost everything 'bout sound he surprises you playing in a completely different mood. but what i love the most besides his music is the enthusiasm we share for reading.
so much that to this day is the only guy from greece that has discovered out of which thomas pynchon book i picked up the 'noise a few decks below' quote to use as a name for absurd's site www.noise-below.org back in june 06 that it was launched.

but to 'iasmos'... it was orion's 2nd birthday that was coming for his 1st we had issued the kiwako kaneda 'cake of sea' cd and for the 2nd we wanted (as usual)a live set of someone who likes children and fancies playing music with them. having issued 'infant' a few months before it was arranged in december 07 for tasos stamou to perform in april in iasmos (the village were children parties are usually held). luckily stamou completely out of the blue pissed us off some 3 weeks before the party but lucky enough larry was doing his military service in the city of xanthi at the time so we picked him up for the party. the result of which is documented on this cdr a part of which uses the live extracts and another part is studio recordings that were added later. issued on a sleeve that is meant to be a train with larry gus being the conductor and us the humble 'musciians' following his instructions! should you wish a sleeve to make your own copy (as we still have plenty of them) just request yours here