leif elggren '45 minutes from underneath the beds' 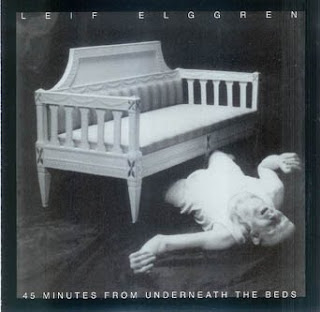 one of my absurd faves... better say the release that blasted the 'research center for the definition of happiness' series back in early 00's and the circular sleeves idea. perhaps that's the reason why i love it more than others as reminds a crazy period out of which was born this series.

the initial sleeve was grey w/ grey lettering influenced by kazimir malevich's works and was accidentally decided when back in 01 i was at maya lavda's office working on ideas for it and how to emerge the circular covers series, etc...

a couple of years later while sons of god were in greece to perform in small music theatre was dropped the idea of reissuing it in 2006 to celebrate absurd's 10th birthday and almost 3 years afterwards on 15th of august 2006 as sugar bar in stockholm was held the re-release party (& absurd's birthday party too). this time on the utan titel label w/ a new sleeve / artwork plus 6 new tracks for the cd reissue.

but guess i talked already too much... better let the sounds speak for themselves...

45 minutes from underneath the beds 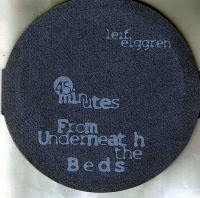