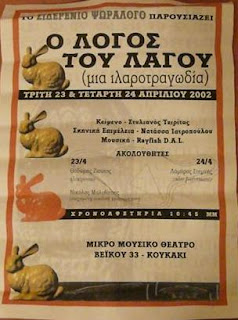 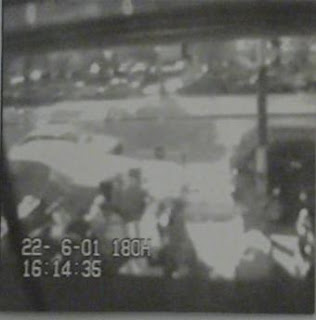 if i was ever to describe april 02 then guess gx jupitter larsen's 'but unemployment is the answer' fits best. having quit my previous job 1 month earlier after some hard workin times was spending a period of creative enthusiasm. so when stylianos tziritas called and dropped the idea for a duo w/ thodoris zioutos and a possible trio w/ labros stemnis on live video mix all 3 we jumped maniacally on the idea.

both dates in small music theatre in late april 02 are still memorable to all of us. a haunting atmosphere which although i can't re-enact here at least you can get an idea of it listening to the document. 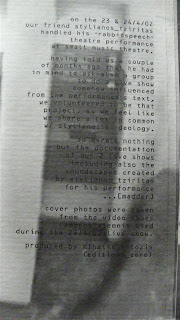 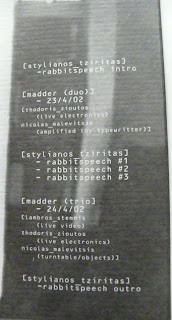 it was one of the first times also that labros stemnis surprised us using as source surveilance video tapes that were lifted from a friend of his back then. he would surprise us in the future with 2 other memorable videos. one where the performer of it begs naked on a pedestrian road asking the people to touch his cock, in the end shits and eats his own shit and one year later in the art athina during the 'pagan' theme where the same performer dimitris ... self whipped himself and in the end the audience was allowed to whip him if they wished too. he managed to crash for sometime in the news. but that's another story that happened later than those 2 early days.