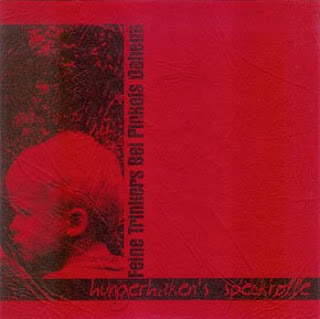 the 2nd feine trinkers release for absurd was a solid track (though while you listen to it you feel like it could have been split to pieces) in an almost different nature to 'papagoyenboom'. insanity still is around but in a different mood.

it also turned to be absurd's 1st 'found cover' release. the cdr was packed in a newspaper and had this photo used on the cover. without 2nd thoughts and as i liked it picked it and used it.

regarding artwork... a kinda 'fake leather' on 1 side paper was used. however as it had to be turned too while being printed nearly half of the copies has the print on the backside and the rest the kinda bookleather cardboard one...