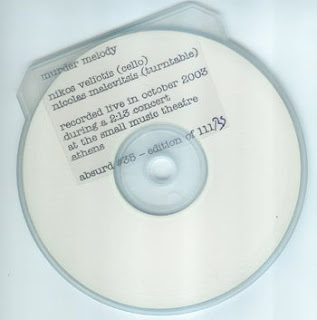 october 2003 saw a super 2:13 mini fest. as summer lazyness was coming to an end the idea of a mini fest was dropped. it was also an occasion of 2:13's 4th anniversary so a trully stellar night was set up. probably one of my favest nights in smt, as far as i'm concerned regarding both the pals we played together, the audience and the whole atmosphere.

one of the night's sets was a duo with nikos veliotis (cello) and me (mr. absurd) on turntables. a reductionist influence in the sound? you can say so... still a fave moment...

at least regarding smt's vs. absurd relations since that time till now i still call it 'a calm before the storm'...


trivia... title was picked from the doc savage 'murder melody' novel. that time i was downloading various 30's pulp from blackmask.com (i think it has ceased to exist) and doc savage stories were some of them. saw myself getting them all on a cdr and asked nikos to pick up a title from the list of all novels included in the cdr so here it is...

happy listening... (don't worry you won't die from the melody as happens in the doc savage novel...)

I found this blog, from a link of continuo's blog, and wish to salute you from sunny Lisboa.
Joao Castro Pinto here, from lisboa/Portugal :-) I wish I could return to Athens and spoke with Anastasis about that, about giving some concerts there... but it's hard to arrange anything for sure with him unfortunately..
I miss you all and Athens...
I'm downloading this concert of you with Veliotis from 2003, the year I was there, in order to remember you all!
Please do visit (bravojuju.blogspot.com) I'm running this blog with a few very close friends, it's a schizophonic blog it has everything, many kinds of sound/music...
I give you also my myspace address for you to visit:
I hope we can all meet again, me, you, grivas, veliotis, zioutos, valsamakis, etc...