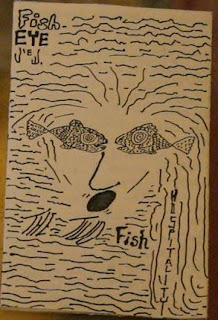 shit, i know the tape label's name sounds ridiculous... however early 90's sounded too cool!!!! took it from an article of the french death/grind zine 'u.s.d.' around an obscure grind band called 'necrocannibalistic of necrocannibalismo'. being back then a zine that could track down some of the most weirdest and rarest death/grind stuff thought it cool to use it for a tape label name... nearly 6 months earlier influenced from a canadian tape mail order of grind (mostly) stuff thought i could start my own distro / tape label... till early 90's the only thing i had 'officially' issued was of my solo noisecore unit's 1st demo tape sickness 'repulsive noise' nothing else... guess it was the grind/noise turmoil we were all in especially for the first few months of 89 before earache launched morbid angel's 1st lp and the death metal fashion outbreaked...
till then and at least for only a few months time using as a base nothing but a rehearsal studio and mostly 2 record stores as meeting points (various other coffee shops & bars were also in the list) chanced to live the greek grind scene at its peak before we all split and each of us followed his own road... back then it was asfyx, a greek thrash better say 'nuclear thrash' band influenced from voi vod (mostly). as side groups of this one were 'industry of crushed conceptions' (started as grindcore band including peris of asfyx, nektarios (of today's 'a strange attractor' record store fame), e.a. but they turned to more industrial then) and peris's 'fish eye view' side project... must admit that still feel extremely grateful to periklis tsoukalas (back then of asfyx, today of the greek folk group xainides) as accidentally he was the one who made me start officially a tape label... fish eye view was a side project he had back then... 89 saw a demo tape of his playing a bizarre lo-fi bedroom fidelity in a more experimental mood... early 90's his parents were to move thanks to their work in arabia and he didn't miss the chance and followed them. before departing we had a meeting in athens downtown where he asked me whether i'd like to release his 2nd demo tape. i took that chance and a few months after (a period during which we had exchanged a couple of letters) i received the master demo tape half recorded in greece, half in arabia and its artwork... without 2nd thoughts i xeroxed its handwritten / handmade cover, doubled tapes and had it out. not too many copies but it was the baptism of fire, first trades, etc etc etc... long story (and feelings too) to cut it short... a varathron tape followed but it didn't have the same feeling as this one... back then i liked it being 'experimental', it wasn't until a few years ago that did i realise that this little tape still belongs to my most beloved ones and without willing to exaggerate still consider it as one of the finest examples of the greek scene's late 80's/early 90's experimental scene... lo-fi bedroom fidelity at its weirdest and bloodiest best!!!!!!!!!

Thanks for this. A Sickness upload would be great too.