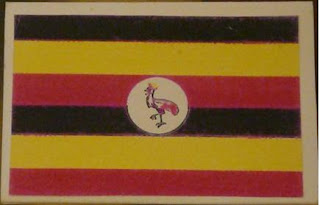 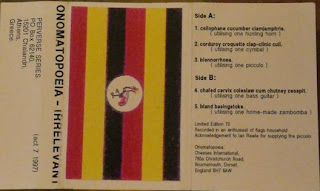 onomatopoeia was the project of steve fricker, known in the 90's for his memorable 'cheeses international' mail order & label. came across him either via stefan schwab's c/o newsletter or thanks to the con-dom 'the eigth pillar' LP on sfcr as steve had printed and distributed the LP's booklet. his first recording attempts i can't say that were my cup of tea... slowly he started evolving a far more better sound so sometime in mid 90's i asked him for a tape. 'irrelevant' was the result and besides a killer tape release was destined to be perverse series's final release. still today i see it as a vital turning point at least regarding the period between perverse & absurd...

it was limited to 70. steve provided 70 different flags that were glued on the tape's sleeve.


play it as loud as possible!!!