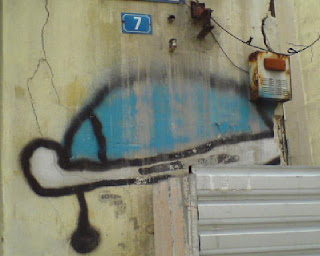 [here's the texts of what was supposed to be absurd #6. 'lost transmissions from planet zero, was issued of course but under a completely different approach, packaging (check the thu 20 post about it). wanna work again those texts and i'll upload that issue too sometime sooner or later.

those ones are mostly interviews, articles or even texts for pure cds done sometime in mid / late 90's.

no matter how hard i checked archives couldn't track down that crazy tochnit aleph interview. however if i ever do so it'll be posted separately.

of course since then various links have changed...

as of harbinger the last 2 months email doesn't seem to work.

meeuw muzak's email is still valid though if you wanna contact jos moers for infos.


(or the what was initially planned to be part of absurd#6. )

since the time of no 3/4 back in july 97, I had started working on absurd 5,
and was collecting articles, etc. unfortunately (plus also due to my
laziness/boredom at times) some material remained shelved and unpublished.
So back at the time I started working on no 5 and conceived the idea of a
sort of a "zero" trilogy (completely influenced from projects such as the
new blockaders, haters, mev, amm, idea fire company, tart, (early) le
syndicat, eric lunde, con-dom, and too loads to mention) wanted absurd 6 to
be dedicated to these "shelved" ones.

the actual "scenario" for the issue was to "invent" stories of how the
previously unpublished material was lost & (re)found or in some others to
had the chance to include "extra" material for the "reissue", such as
happens for instance with various reissues of lost (& found, afterwards, to
realize that the track order wasn't the right one, or the mix was bad, so
let's "dissapear" the reissued copies and make a new lost&found edition,
blah, blah, blah) 50's/60's/70's obscurities (w/ 80's still's a problem but
sooner or later a greater need is gonna be created in the market so.) when
for instance a band/artist (whatever) of that time had only issued back then
only but a 7" or a sole lp and suddenly today is reissued a deluxe 5
cdboxset for instance including extra unpublished material that was lying
around his house, or his ex-girlfriend's house, etc etc etc.