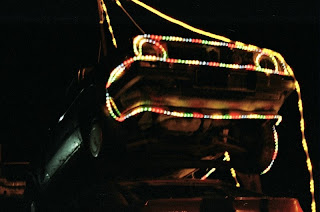 [another unpublished archive document... the entire interview was manipulated to an extremely short text that was to appear in an unpublished issue of overdub zine... anyway enjoy...]


i came across phil turnbull or better say he came across me a couple of years ago when droppin’ a mail in the avantgarde_cdr mail list asked for some fall stuff on cdr to listen. phil answered, we did a little trade and when received the desired cdr, i noticed he had included a cdr compilation named ‘poor galileo he has gone mad’ a kinda anthology of australian post-punk bands of the late 70’s/early 80’s… pretty funny but when i put it in the cd player could never imagine that i might get hooked to it. suddenly found myself listening to voigt/465, scapa flow, systematics, seems twice and more… and slowly too dropping a line to phil for more trades.
for those unfamiliar to his name, he was a member of the legendary voigt/465 group, then wild west and no nights sweats and the last few years he’s been one of those guys who w/ great respect & love for those good ol’days started restoring the old material in digital form trying to ‘save’ it in a way or so (call it whatever). in his site you can get infos on various reissues on comp cdrs he has done or infos on other related australian post punk groups/labels/reissues. plus much more… and why not asking him for a little trade in order to discover & enjoy some truly joyous moments?


[ Smelly Fish ]
Yesterday it was Wollongong harbour (wiv me mum) where the smelly fish were smelly. Sometimes I can stand it and other times not - retching, nose blowing, ingesting water and soothing Stevesant smoke (when only the best will do) are the ways in which I can partially stop the smelliness going too far down my throat.
Luckily, none of these occurred yesterday and I was able to make a delightful bar-b-q lunch of thai kingys and succulent gem fish. See, I can cook and eat it but not ever smell the raw smelly fish.

- so when did you start restoring the old tapes archives?

i'd dabbled in digitising vinyl and cassette source material during 2000 but only really got enthused in 2001 when there was a concrete proposal to add some tracks to what eventually became the "can't stop it" compilation, released by guy blackman / chapter music. all of the material for voigt/465, wild west and the tame o'mearas was remastered professionally at one of sydney's most famous mastering studios - studios 301. but, in some ways most importantly, i got the right software and computer hardware to be able to do all the rest at home on much cheaper equipment. overall i'm very happy with the results - i may not have a mastering engineer's ears but i think the stuff i've done at home is pretty good anyway.

- how did you come up w/ the idea of the 'australian post punk' archives comp. cdrs?

as above, really. the initial impetus was doing the professional mastering but then i realized there was a lot of singles, eps and cassette 'masters' in my possesion that would only just deteriorate more if i didn't put the effort in and do it myself. the vast majority of the 'australian post-punk archives' cd-rs are studio recordings either released on vinyl that i still kept after all these years or came from cassettes that band members and studio participants had copied and kept, for the most part, in the back of their cupboards. ofcourse, the rest of the archives are sourced from bootleg live recordings that tim vandenberg and patrick gibson had made at the time. tim's collection was vast and patrick's was eye-opening.

- besides the app archives have you compiled any other cdrs/cds?

i digitised and cleaned up all of my old vinyl that hadn't been re-released on cd at the time. the 1st one was the early scritti politti singles which I did around 2000. i called my compilation "early stuff" and it was was widely copied across the internet community. the recent official release of this material is called "early". i wonder where they got that name from?? i also did lots of the fall and so on but, for the most part, it's all been re-released professionally since i did them and these always sound better than my attempts simply because my source vinyl was so degraded after all those years of cummunal living.

- a little bit 'bout the past, how did voigt/465 start? and can you give me a few details on the rest of the projects you've been into such as wild west & no nights sweats?

during the later years of high school, myself and some friends started learning to sing and play instruments in typical garage band fashion. then, before i started art school in 1976, i bought a synthesiser and i got together with 2 of my schoolfriends who had a liking for music which had a more avant leaning. we spent 76-78 learning how to play properly doing lots of systems music and spacey jams along the way. with the advent of punk and
the sydney underground rock scene - radio birdman et al - we tried to toughen up the music and, eventually, we did to some extent. voigt/465 broke up in 79 and i gravitated to another high school friend and one of the slugfuckers to make similar kinds of music to voigt - but with a more melodic bent : wild west. it started off as just more of my angular jerky rock things but this was eventually put aside, luckily, for peter nelson's slower, more moody pieces. the drummer left but we kept on using other friends as guest stars in the percussion spot until peter left to go overseas in 82. luckily we'd recorded a lot of material and we'd copied these masters onto cassette - we only have one master tape form this whole time - the voigt/465 single sessions - all the other masters were destroyed or taped over. after wild west i just played music at home onto a 4 track teac reel-to-reel where i got love my arp odyssey even more. i eventually played this stuff to patrick gibson and we started adding vocals on top and mixing them at m-squared studios. this naturally went on to live performances where the casette player was the star whilst pat and i roamed the stage in bad sinatra / martin gear.


- any other sites around the australian post punk scene of the late 70's/early 80's that you recommend?

all the links i think are important are at
http://www.users.bigpond.com/pturnbul/nns_band_links.htm

can you jot me in brief some of your memories of the late 70's/early 80's aussie post punk scene? moments, places, groups, etc. fave australian post punk bands of the time?

the main memories are of fun, excitement, huge numbers of friends and a "who gives a fuck" attitude about it all. i NEVER thought that i'd become famous with music but it was just so deeply satisfying to play with friends, to record the songs we'd created by ourselves and to play in front of all our other friends. the number of people who came to see us slowly expanded but I can pretty much say that they were all known to us - we loved meeting new people at gigs and getting drunk with them later as other bands played. It was all pretty much hand to mouth, really. no-one in the proper performance
spaces - hotels, bars, concert halls - would have anything to do with us so we had to organise gigs for ourselves in inner city community halls and soon. most of the time these ended in noise complaints, etc and we never made any money out of the gigs. for myself and most of my close friends, we kept up full time employment even if making music was our way of life. Of course, there were obviously bands who didn't have jobs to support them and who also wanted to make money from what they loved doing. boys next door, pel mel and tactics are 3 that come to mind who, in there own ways, made a living of sorts from continually playing and expanding their live performance base outside of the inner cities. my favourites are still the tame o'mearas, tsk tsk tsk and the systematics.

there's a few bands / artists that i continually return to : faust, can, neu!, henry cow, slapp happy, robert wyatt, this heat and pere ubu. all of them were ingrained into my psyche during my late teens and early twenties. i must have played can's "ege bamyasi" at least twice a month since the mid 70s - so 700 times all up. and i was sooo happy when it was re-released last year with just fantastic sound quality. wyatt's "rock bottom" was also a
very personal favourite - most of my friends liked it grudgingly but it just sat on my heart like a warm pillow. this heat's "health and efficiency" is the BEST post-punk song ever made - weird, heartfelt and played with such vehemance that it shines. and pere ubu's "modern dance" is probably the best post-punk LP - not a single dud moment.


- can you give me some infos on your monday missive's?

the monday missive's were initially a way for me to keep in contact (on a personal basis) with work friends after i strted to work from home for half the week. i felt, rightly, that people would start to forget me so i wrote some funny little stories to remind them of my stunning wit! these eventually took on a more surreal role in my life as i started to enjoy writing them and worried less about how people would react to them. eventually i gave up due to tiredness, illness and lack of response from the dwindling number of people who still remained in the office.
Αναρτήθηκε από www.noise-below.org στις 1:48 μ.μ.

thanks once again for links and all that. hope that life in eastern EU is good in 2009.