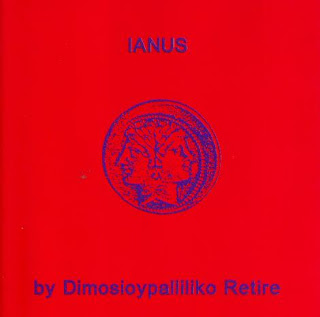 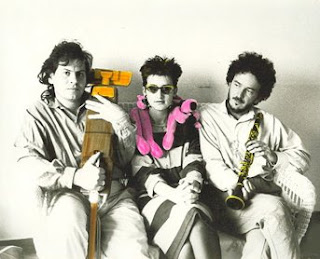 dim. retire besides being cool friends for a long long time have been an influential project for me back in the early days. legendary for their performances (at times risky and dangerous ones!) but also for their humorous, cynical (well call it whatever) view around various topics have been a project that me speaking stands as the most impressive regarding experimental musics of the greek scene of the 80's / 90's... around late 70's they used to run 'shedia'(=raft) publications, in the 80's the 'alli poli' project including publications, performances, also a same titled gallery in the city of thessaloniki. at a certain point they used to run a pirate station too. since mid 90's performed under the name of chondros / katsiani, the names of the 2/3 of the project. a series of projects, performances was handled including as well publications too. soundscapes of those performances were documented on the cd '0+' on records 'edo' (= greek for 'here'). sometime in early 00's issued a series of almost 10 cdrs including new audio works plus reissue of older material including tapes from the 80's or recordings from performances handled in late 80's / early 90's. you can still ask for infos around them here


'ianus' was supposed to be the 1st cd of the disbanded 'harsh dept prods.', well, due to various problems turned to be the project's 2nd cd release or better say almost its final or posthumous release. issued a couple of months before i finished my military service, just about to launch perverse series (that went bankrupt a few months later in 1996) i still see this cd as a turning point between a certain period to another one... initially listened to it in 93 a few months since its recording. if am not mistaken was used actually for a performance or kinda like that at alli poli back then. recorded and mastered by costis drygianakis (then of the 'optical musics' project fame). arranged its release in 93 but finally managed to see daylight almost 2 years after... the work is supposed to represent the 'faces' of janus the roman god (hence the printing mistake in title). side 1 let's say a more 'angry' face, 2nd a more 'mellow' one (at least always seemed to me like that). 3rd track is the simultaneous play of both. work initially for a radio play, or better say simultaneous play from 2 different radio stations. unfortunately such an idea never occured...

trivia : at the time the cd was handed at the manufacturing plant, greece was under the fever of a satanist or so cult, the day the master was given for the glass master i was called by the plant's representative and asked whether the voices on the 1st track are part of an 'occultist', 'satanic' ritual or an invocation of something like that!?!?!?!?!!?!