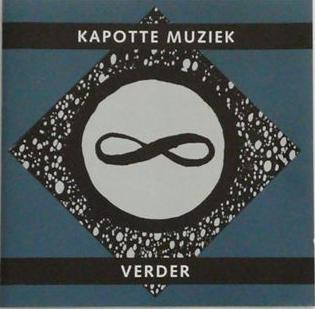 'verder' was harsh dept's 1st cd release (after a couple of failed attempts for a cd compilation in 91-92 and an unpublished 'factor X' lp in 93) and came out in late 94.
the original plan was to start a cd series under the title 'abyssos', probably influenced from various labels of that time that used to divide their releases in various series or sections can't recall exactly why now...
the cd included 4 mail collaborations of frans de waard with luminaries like telepherique, agencement, the haters & merzbow.
the print run was 1,000 copies. still in it is reflected the sound of that time plus tendencies of 80's & 90's in sound, from manipulated shortwave to lots of other tricks... beloved classic sound!!!

trivia : cover colours are darker to the original design. a week before the cd was planted, a tremendous storm hit athens. the printer who used to collaborate with the manufacturing company used to have his studio in the garage of the building where his office used to be and everything flooded. films got wet, i was told that they won't have a great problem so when they got dry were used for the cd covers.

thanks also to the master dat order track 3 was placed as number 4. same mistake kept here though for the tracking i used the right track title. besides you can realise the difference when is the haters and when is merzbow! verder
Αναρτήθηκε από www.noise-below.org στις 7:18 π.μ.